Here’s a closer look at the advantages and disadvantages of these compact rimfire pistols.

Over the last few months we’ve seen the launch of new handguns chambered for .22 LR that sport the same looks and features as center-fire handguns designed for daily concealed carry. The models I’ve had a chance to work with so far include the compact Taurus TX22 semi-automatic pistol, the pocket-size Ruger Lite Rack LCP II, Kel-Tec’s P17 semi-automatic and the Taurus 942 8-shot snubnose revolver. But small, easy-to-conceal .22s have been around for quite some time, including the Beretta 21 Bobcat, Ruger’s SR-22 pistol and LCR rimfire revolver, Smith & Wesson’s M&P 22 Compact and Walther’s P22, to name just a few. 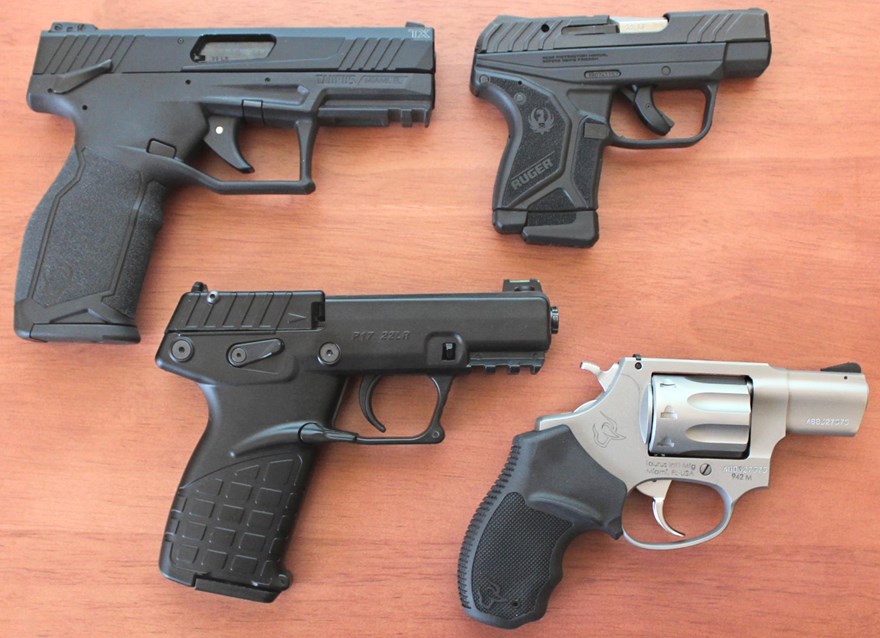 With so many easy packing .22s on the market, one might assume that they are a popular option for personal protection. However, professionals in the self-defense community almost universally pan the use of small rimfires for self-defense. I’ve heard some go so far as to say that those who choose a rimfire over a center-fire model are lazy, ignorant or just plain don’t care about protecting themselves properly. Manufacturers say these little guns are made for “sporting purposes only” but there’s no doubt that they are being pressed into service as defensive options. I know this because people I believe to be attentive, informed and focused on self-defense have told me they carry .22s. Holster makers are on board too with models for in-the-waistband (IWB), pocket and purse carry. 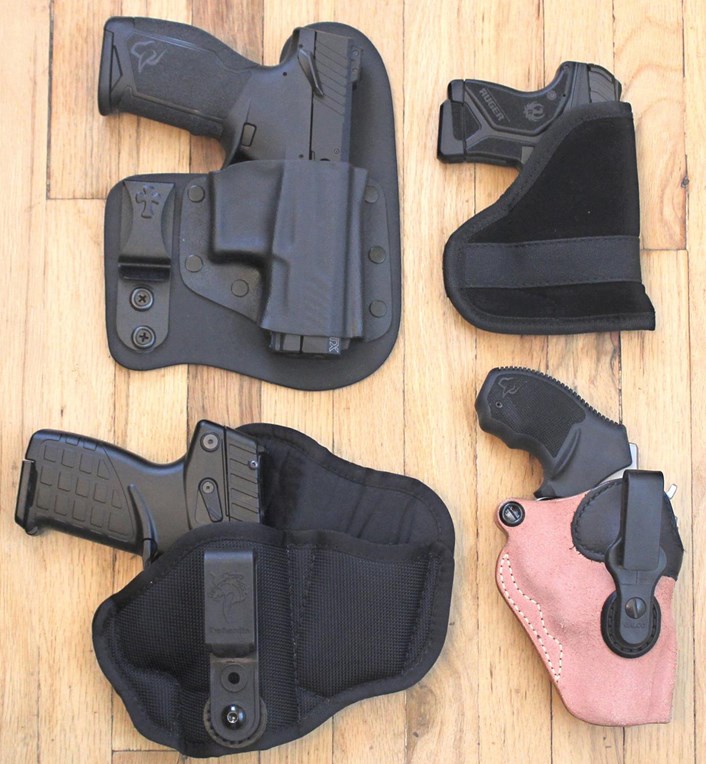 These .22s fit neatly into a variety of readily available concealed carry holsters.

If you feel like you’re getting mixed messages here, you’re not alone. On the one hand, gun manufacturers wouldn’t be producing so many of these small .22s if there wasn’t a demand for them. On the other hand, compact .22s are regularly denounced as inferior defensive tools. That’s why I wanted to take a few minutes and walk through the positive qualities that make .22 LR pistols an attractive option for self-defense along with the disadvantages of the platform so that you can make a more informed decision.

Advantages of .22 LR Handguns
I’ll be the first one to say that there’s a lot to love about .22s. It’s difficult to overstate the popularity of the .22 LR cartridge among American shooting enthusiasts. A few years ago, one of the major rimfire ammunition manufacturers reported that they had expanded their production capabilities from approximately 3 billion rounds to 5 billion rounds per year to meet the high customer demand at that time. And that was just one of several manufacturers and importers. 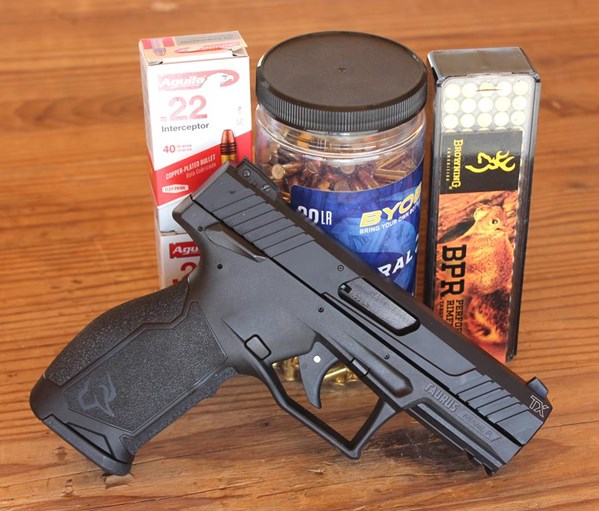 One of the factors that drive its popularity is the .22’s low cost. It’s the least expensive rifle or handgun ammunition one can purchase with cartridges costing somewhere between $0.05 to $0.20 per shot, when demand isn’t through the roof, and depending on the quality of the load. Compare that to the 9 mm semi-automatic cartridge, which is currently one of most popular and affordable center-fire pistol rounds in the world. It can run between $0.19 to $1.00 per round. The savings that come with shooting .22 LR can add up quickly. 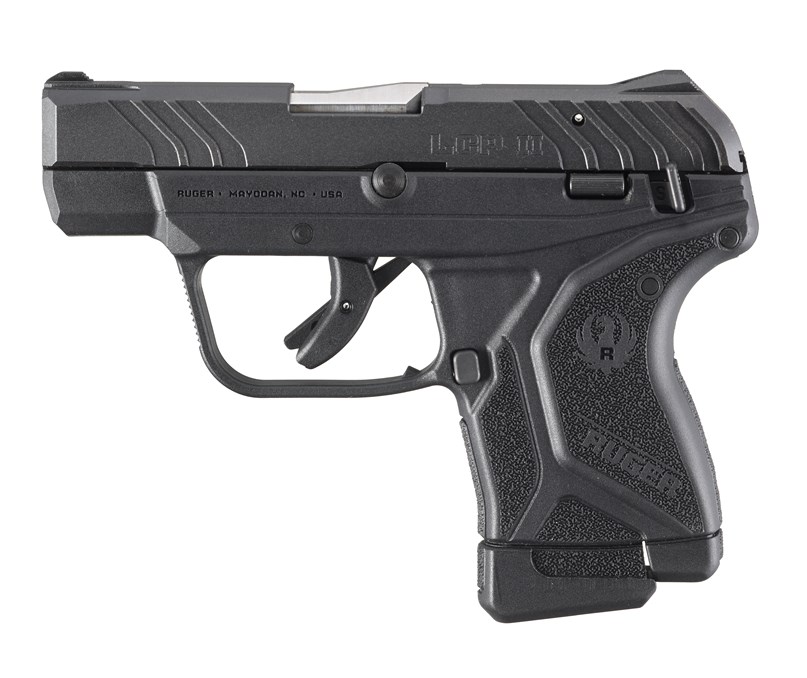 Ruger’s Lite Rack LCPII is a clone of the company’s popular pocket-size .380 ACP. It ships with one 10-round magazine.

The .22 LR is also a favorite because of its low recoil and soft report. Its mild mannered shooting characteristics make it easy to practice with. It’s a terrific option for new shooters who are mastering the basics or seasoned enthusiasts looking to hone their skills. The handguns chambered for this cartridge tend to be affordably priced and light weight making them even more pleasant to work with. Most folks who participate in shooting endeavors have a .22 LR rifle of some sort as well. This allows your handgun and long gun to be fed from the same boxes of cartridges in order to reduce ammunition costs even more.

Limitations of .22 LR Handguns
The .22 LR has two noteworthy limitations for personal protection applications, both of which are neck-and-neck for first place on the list: reliability issues and effectiveness. Let’s start with reliability.

The .22 caliber rimfire cartridge is among the oldest designs still in common use. Its design dates back to the 1850s with the release of the .22 Short. Over time, the cartridge length and bullet weights were modified and optimized into the .22 Long Rifle (LR) round we know and love today. They are called rimfire cartridges because the priming compound that ignites the powder is spun into the interior of the cartridge’s hollow rim. A small portion of the rim is struck and compressed by the firing pin to ignite the priming compound. 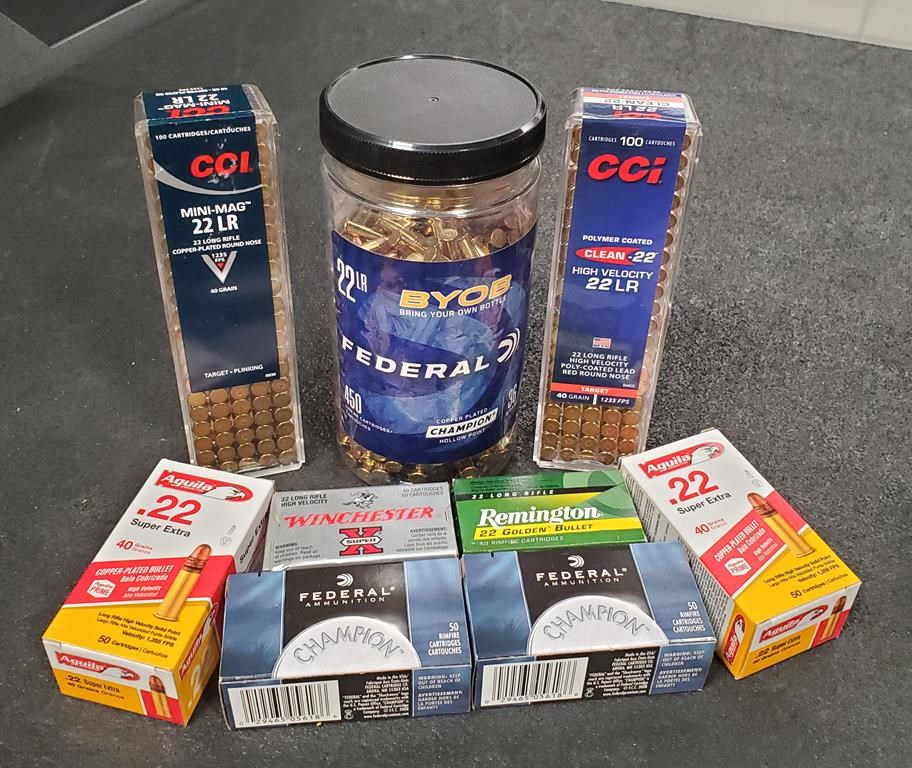 .22 LR ammunition is available in a broad range of brands, bullet weights, bullet velocities and quality levels. It’s important to test your pistol with a variety of loads to see which ones it will fire reliably.

Despite the advances in manufacturing processes and materials, rimfire cartridges fail to fire more frequently than center-fire cartridges. It’s simply a less reliable cartridge design that has been abandoned with larger rounds. Inconsistencies, or gaps, in the primer compound prevent the powder from igniting when the firing pin strikes. When working through a 500-round bulk box of .22 LR ammunition, it’s not uncommon to find a half dozen or more duds in the box. But at $0.05 a shot, it’s still a bargain and not much of an inconvenience at the shooting range. High quality loads tend to be more reliable than practice grade loads but the increased likelihood of a failure to fire or jam remains.

This brings us to effectiveness. The photo here shows six popular center-fire handgun cartridges, commonly used for self-defense, next to the .22 LR. If the diminutive rimfire round looks outclassed in this line up, that’s because it is. Make no mistake, the .22 LR is a potentially lethal round that should be taken seriously and treated with the same respect as any other cartridge. However, it launches small lightweight bullets with powder charges designed for 16″ to 20″ rifle barrels. As a result, the already small bullets lose a good deal energy when fired from 2″ to 4″ barrel handguns. Hollow point bullets which expand when fired from a rifle usually don’t expand on impact when fired from a handgun.

There’s a good deal of science that goes into understanding the minutiae of how bullets work and the effects they produce. Suffice it to say that larger, heavier bullets traveling at higher velocities produce a greater impact on the target than smaller, lighter bullets moving at lower velocities. One of several parameters used to measure bullet performance is how hard they hit the target. This impact energy is measured in foot-pounds (ft.-lbs.). The following list shows the range of bullet energy levels produced by the 4” barrel Taurus TX22 compared to the same six center-fire loads seen above:

How do you compensate when defending yourself with a less potent cartridge? The common strategy is to be prepared to fire additional rounds. Few assailants are able to ignore a cluster of center-of-mass bullet strikes no matter what caliber the handgun may be. And .22 LR handguns lend themselves to better shot placement due to their low recoil.

However, having to fire additional shots to stop a threat comes with its own limitations. The first one is time. The longer it takes to end the confrontation, the greater the opportunity an assailant will have to cause harm to you or others. In addition, every shot fired has a personal liability sticker attached to it. You are responsible for the damage you cause. More rounds in the air means an increased possibility of a bullet missing its intended target and striking something, or someone, else.

Useful for Self Defense or Not?
At this point, some folks will be wondering if I’m promoting or condemning .22 LR pistols as defensive tools. I don’t believe that sorting out which option is “the best” one is always a 100 percent black-and-white proposition. All defensive handguns are an exercise in compromise when it comes to size, weight and power level. It’s also important to remember that concealed firearms, like any other tool that’s at hand when an emergency situation suddenly arises, provide their carriers with options, not solutions. 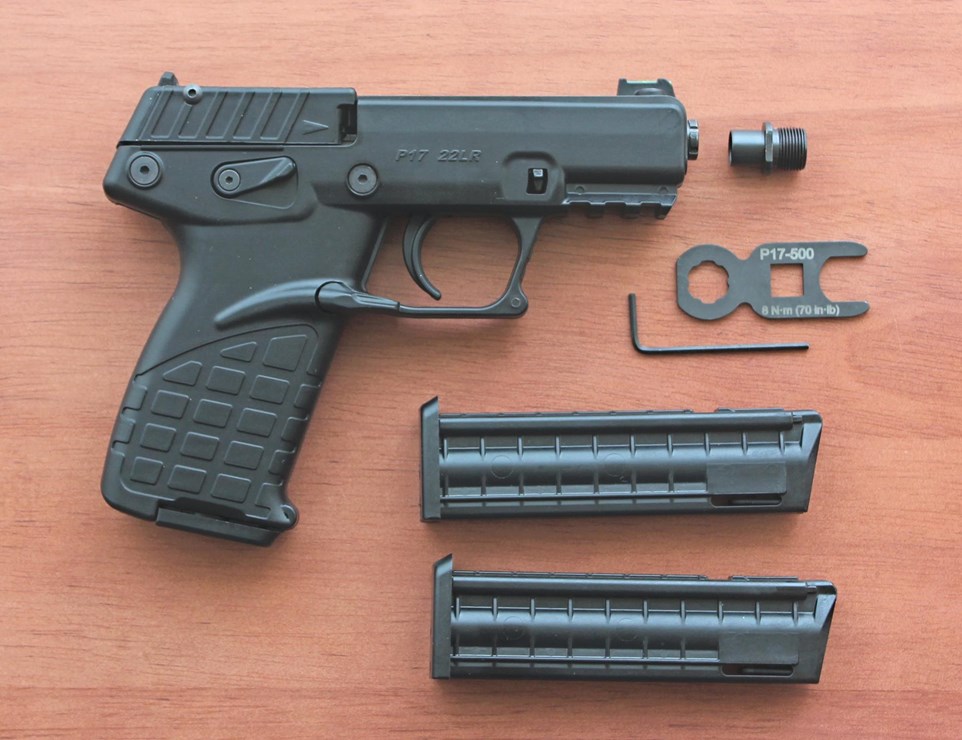 A compact 5-shot .38 Spl. revolver you shoot well at 7 yards provides a different set of options than a mid-size 13-shot 9 mm pistol you can print tight groups with at 20 yards. A pocket-size 11-shot .22 LR pistol you’re willing to carry daily and practice with regularly provides you with a different set of options than not carrying a gun at all. This means that the key to understanding which handgun is best for your particular needs and preferences is doing your homework so as to understand the advantages and limitations that each model and ammunition combination has to offer.

I continue to stick by the common training advice that an individual should carry the most potent defensive handgun they can operate safely and practice with regularly. However, I do concede that there are times when it makes sense to turn to rimfires for personal protection. Physical limitations due to age, injury or infirmity may make center-fire levels of felt recoil difficult or impossible for an individual to manage. It may be that a .22 is the only gun you currently have access to or, if you own a limited number of firearms, you may opt to stage your trusty .22 as a back-up to a primary center-fire handgun, rifle or shotgun. 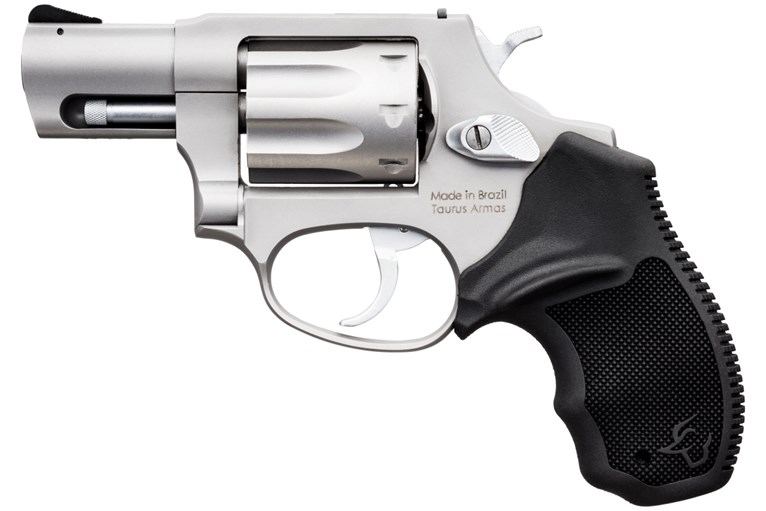 The 8-shot Taurus 942 snubnose revolver is available in all-steel or lightweight aluminum frame configurations chambered in .22 LR or .22 Mag.

Again, using a .22 LR pistol for self-defense is not an optimal choice. But if you do choose to use one, please keep the following recommendations in mind:

I would want to see at least 200 rounds of a given load fired reliably through the gun, more if possible. Some guns don’t shoot well with certain brands of ammunition (you won’t know until you try them) while others prefer certain bullet weights or bullet velocities. Check the owner’s manual or call the manufacturer to see if they have any restrictions or recommendations for which ammunition to use.

Avoid less-expensive bulk box loads intended for practice and plinking. When I have .22s jam up during a typical gun test, before the gun is excessively dirty, it is almost always a bulk box load with a bad primer or a light powder charge that causes the problem. Save the bulk loads for the range and carry the good stuff.

All handgun calibers, rimfire and center-fire alike, can fail to stop a threat with the first shot fired. It’s not uncommon in a defensive situation to need to fire follow-up shots, especially when using a less powerful cartridge. Seek out proper defensive handgun training and be sure to incorporate follow-up drills into your practice sessions.